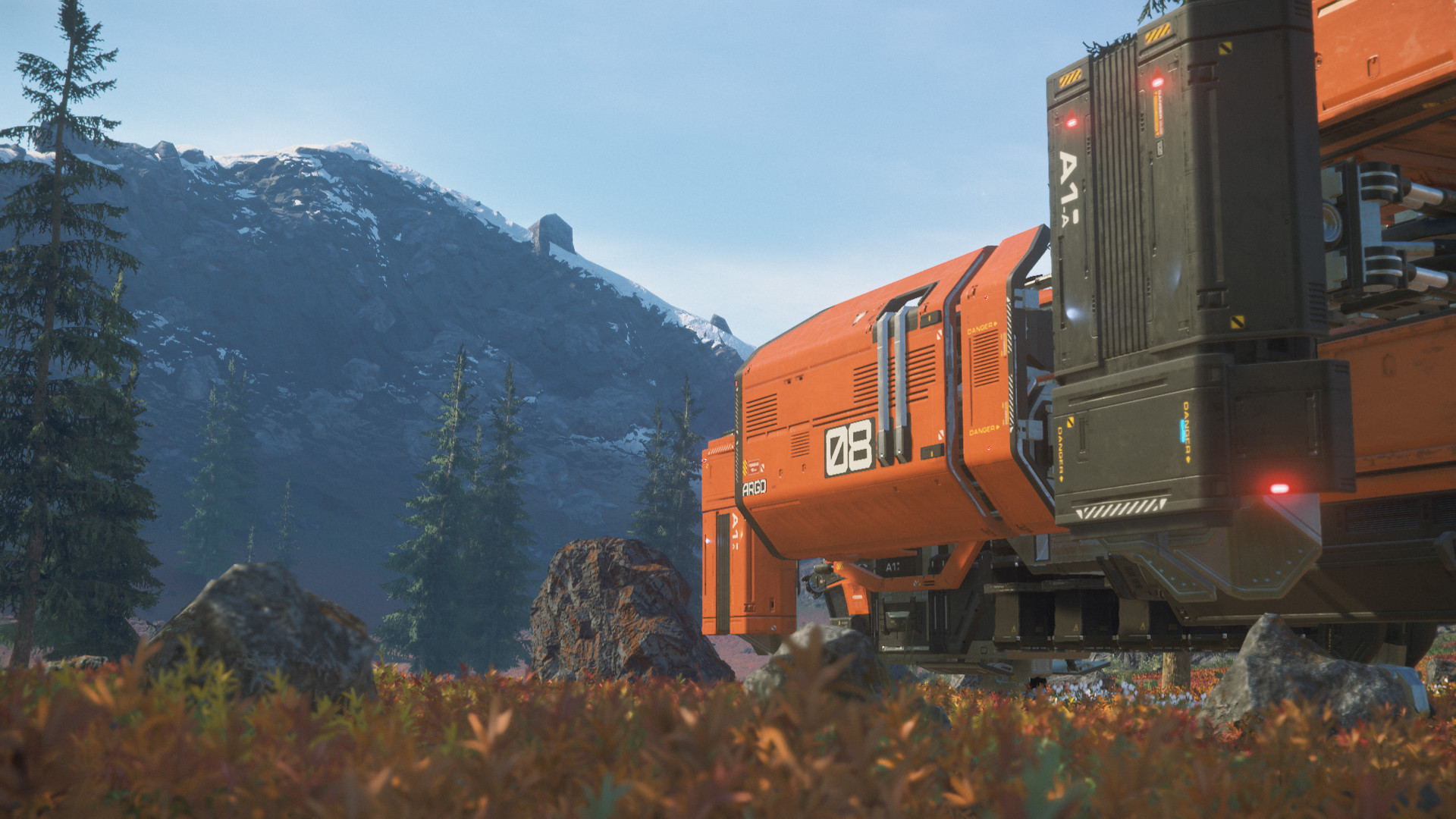 So, I understand you're new to mining, and that you may be interested in becoming a crew member. Well, we happen to have some openings, so let me tell you a bit about some of our equipment.

First, let's start off with a mining ship that makes it easy to teach you how to mine... This is Maggie. The HF Maggie, that is. She's a MOLE, a Multi-Operator Laser Extractor. MOLEs are manufactured by Argo Astronautics. As you can see by the number on the side, Maggie is the eighth ship in the first lot of MOLEs that Argo (finally) brought to the Stanton system. Let me tell you, they sure took their time. Maggie's owner and Captain is Glumm. When he heard Argo was finally sending some ships out to our little up-start system, he couldn't wait to have a MOLE in his personal fleet. So, he contacted the Argo representative accompanying the first lot of ships on the freighter, and bought her, sight unseen, by encrypted communiqué; no video, no voice, pure electronic message and credit exchange. Unheard of!

At any rate, when Maggie arrived, she was a sight to behold! I don't know about Glumm, but I was in love! Maggie was immediately my favorite ship of all time.

But, Maggie is Glumm's ship. For the most part, I primarily serve as her pilot, but I'm also a turret operator, and I'm in charge of maintenance, repairs, and refuelling. It's my job to make sure the crew can keep mining, instead of being stuck at some remote station while we wait for parts to arrive. I spend a good deal of time looking after Maggie, as though she were my own. Mostly because an operational ship is a profitable ship, but also because I truly love this ship!

Of course, as soon as the freighter had off-loaded her, we didn't waste any time; we hopped right in and headed out for our first mining run. I can assure you, that was an eye-opening experience! Oh, how I wish I'd spent more time with the Pilot's Operating Handbook before we set out on that first trip!

HF Maggie is named after one of Glumm's dogs, due to some common traits, of course. As Glumm puts it, "she's thick and a little bite-ey."

Indeed, that first run proved Maggie wasn't one to be taken lightly. She was bigger and more powerful than anything I'd flown to that point, and it was obvious I had a lot to learn about her.

One lesson she taught me right away: she has a lot of mass; that's where Glumm says she's thick. She has enough inertia that, if you aren't paying attention, you will quickly spin out of control, and likely end up run-aground on the surface of some moon, instead of mining, as you'd intended; that's where she's bite-ey. But, she's a strong ship and can shake-off quite a lot of abuse. Which is good when you're learning to fly something encompassing this much mass. A word of advice... keep your speed limiter at or below the orange tick mark on the speed tape until you have a few-dozen hour under your belt. She's mighty unforgiving if you run the speed up too high.

To help compensate for her mass, she has an impressive assortment of engines and manoeuvring thrusters. However, it's also important to know that once you've built up enough speed, short of spinning the ship and using full forward thrust on the opposite vector, you won't be slowing down anytime soon. In fact, until Argo decides to release the upgrades for the retro-thruster package, you have to deal with engines that are only half as effective in full-reverse as they are in full-forward. Hence the warning to watch your speed.

Now, the first half of MOLE is Multi-Operator. And, as I mentioned earlier, the MOLE has three laser turrets on it. There's a good reason for that... Some of the rocks you and your crew are looking to mine may be too large to be cracked by a single laser. The job becomes much easier when other crew members train their lasers on the same rock and help build up the heat necessary to crack the rock. Once the rock has broken into several smaller pieces, each operator often takes responsibility for further breaking down what's in front of them and collecting the valuable pieces for transport back to the refinery.

Before you're ready to take on the role of mining pilot, you should definitely spend some time in the mining turret. The reason for this is so you understand what the turret operators have to deal with when approaching and attempting to mine a rock. It certainly helps if you have prior experience mining in a Prospector, but it's not absolutely necessary.

In fact, because we want to ensure we have capable miners on our crew, we often take aspiring miners out on training runs. The big reason for this is that you have time in-seat with a crew who knows the various tools and techniques necessary to be a successful miner. If you're able to pick up on the knowledge and skills that you learn in the MOLE, you can then easily transition to the Prospector, where you become a one-person crew, flying and mining from the same seat. In fact, in most cases, the mining laser equipped on the Prospector is nearly identical to what you would see on a MOLE but smaller by one size.

I'll tell you more about the Prospector, later, but it's good to know the skills you'll learn here are directly transferable to other mining platforms.

So far, Maggie probably seems fairly simple. And, for the most part, she is. However, there are a few things that still aren't yet operating at full capacity. It took Argo several months to fix the ore cargo system, to allow Maggie to collect the full 96 SCU of advertised capacity. It also took the Argo techs several months to correct a fuel burn issue; the engines were sucking down fuel like it was going out of style, and it was difficult to complete a single mining run on a single tank of fuel. Fortunately, they solved both of those problems and things have been far more profitable since that time

But, there are few things Argo has left to correct, though...

Filter screens! We've been waiting for Argo to send screens out to the Stanton system. Apparently, other systems are higher on the priority list. When we finally receive them, the filter screens will help us reduce the amount of inert or under-value material as we move from rock to rock. The intent of the screens is to pre-sift the ore to keep more of what you want and less of what you don't. It's no substitute for the full refining process that currently requires the services of a mining station, but the screens are intended to help optimize the material your crew collects.

Droppable ore bags. This is still on the fix-list for Argo. We need updates to Maggie's control software so we can drop the eight mining bags from the ship so that a transport can carry them to the refinery, while new bags deploy and the crew keeps mining. Right now, we can eject the bags if we have some unstable cargo, but it's currently a last-resort sort of thing. Right now, if you drop bags, you're headed back to a station for repairs. C'mon, Argo... We need our upgrades.

A working galley is also high on the list. Glumm drinks coffee by the pot. But, not even the coffee maker is working in the galley right now. You might be able to imagine what it's like to head out for a mining run without a fully-caffeinated Glumm... Argo was in such a hurry to send ships out to Stanton, they sent them out incomplete. I bring extra jugs of coffee on each mining run, just to keep Glumm smiling.

Oh... And, don't even ask about the head. We'll be back to a station soon enough; just sit tight until we return.

I think that's enough for the moment; we can talk about specific systems, later, once you're aboard and settled in. Right now, you can prepare yourself for the next segment, when we'll talk about the mining process, including scanning, fracturing, collection, and transport.

Keep up the good work!

Ship Scanning: Finding Something To Mine...

Don't be afraid to ask for help!